Excavators and other equipment designed for use on rough terrains and are using hydraulics extensively for many functions. Motors, pumps are combined in hydro-static drives and used for propulsion.

For pivoting and rotational motion, rotary actuators and motors are used. The arms, booms and buckets are controlled using cylinders. Hydraulics is also used for boom extension, steering and other applications.

Though the different construction equipment for heavy-duty applications may appear similar, they differ in their functionality. 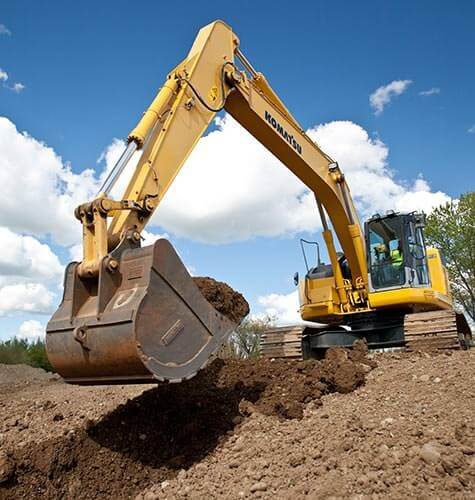 One of the most important aspects of any construction project is choosing the right equipment. For example, there are major differences in the weight, size and capacity of a backhoe and an excavator.

If many gallons of hydraulic fluid was not used in the hydraulic systems, the compact excavators available would be difficult to use and noisy.

Without hydraulics, the excavators would use chains, gears and cables which grind and clank, to complete the work assigned.

The operators would have to pull and push levers made from cast iron through slots. Since hydraulic systems are used in excavators, the operators only have to tweak the joysticks and only a humming sound is heard, when the equipment moves from one position to another, or the tools at the end of the boom are activated.

Hydraulic systems and electronics are combined to produce smart technology which is used in excavators. Compact excavators have hydraulic tool exchange systems for quickly changing tools which make them versatile.

Yet the process of exchanging the bucket on the excavator for a swivelling grapple is fairly complicated in terms of the process in the hydraulic system. Each excavator will have a reservoir with approximately 15 gallons of hydraulic fluid.

This fluid is an oil with additives added to reduce the wear and tear on the hydraulic components. More gallons of the fluid is found in the pipes and tubes of the hydraulic system after it is charged.

The hydraulic fluid is vital to the functioning of the hydraulic system since pressure differences are used. The scientific principle that liquids could not be compressed was discovered a few centuries ago.

Hence the pumps in the hydraulic system will force the fluid through pipes and hoses, which are narrow in diameter, creating a mechanical force. The fluid pressure at the end of the pipe or hose (line), activates pistons and other moveable parts.

This results in different kinds of actions, a bucket may move through the soil, a drill will start spinning, and another unit clamps down.

The electronics monitors the functioning of the hydraulic system and the pump output is modified to match the workload. Reducing the power consumption of the hydraulic pumps helps in saving fuel.

Pressurized hydraulic fluid is used by the fan drive to control a fixed displacement motor. The speed of the fan depends on the motor torque since the fan is a centrifugal load. Hence the motor pressure differences control the fan speed, increasing efficiency.